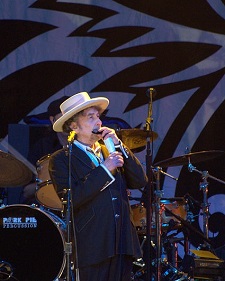 Bob Dylan won a Nobel Prize for Literature in 2016. Not that his career needed any validation, but that certainly provided it. And unlike so many of his contemporaries, he is not coasting on his fame and past hits. To everyone’s surprise, Dylan emerged in 2021 with a brilliant new album, Rough and Rowdy Ways, and an astonishing song about the Kennedy assassination, “Murder Most Foul.”

At 81, Bob Dylan is now a Picasso or Stravinsky figure, an artist blessed with a long life and a vibrant, lifelong career full of unexpected shifts and changes and relentless artistic searching. Dylan’s continuing vitality is obvious to anyone who is listening. Unfortunately, in most courses considering Dylan, the later eras of his career are rendered almost as footnotes, squashed by the sheer weight of his early breakthrough masterpieces. But he continued to create new ones and reinvent his art many times over. These sessions will allow for a better reflection on Dylan’s work beyond his 60s, the best of which was, and continues to be, a revelation.

*Please note: This course is a virtual learning opportunity held via the online platform, Zoom. The link needed to participate will be supplied via email prior to the first class session.

Glenn Gass is a provost professor emeritus at IU’s Jacobs School of Music, where he created courses on the history of rock music that were the first to be offered through a music school and are now the longest-running courses of their kind in the world.