In his time at IU Bloomington, senior Ky Freeman has been a Groups Scholar, served as president of the Black Student Union, and been a member of the IU Police Department Advisory Council. Now he’s taking on his biggest role yet: 2021-22 Student Body President.

This past summer, when we talked with Freeman, he was ready for fall. Getting students fully back on campus and talking with them in person—he couldn’t wait. As he counted down the days, he talked with us about his administration’s vision, his views on leadership, and how he got where he is today.

Freeman’s administration is focused on “cops and CAPS.” That’s their shorthand for prioritizing student safety and student mental health. (CAPS is an acronym for Counseling and Psychological Services.)

“Coming off of 2020, I think there’s a lot of apprehension [around police], but that cannot negate the fact that students are still coming back to campus, and they still have to be safe,” he said.

“I try and work with a growth mindset here. I’m really looking at alternative ways we can ensure that people are safe in our communities—how we can actually explore the intersection of policing and mental health at the same time and understand how that looks on our campus.” 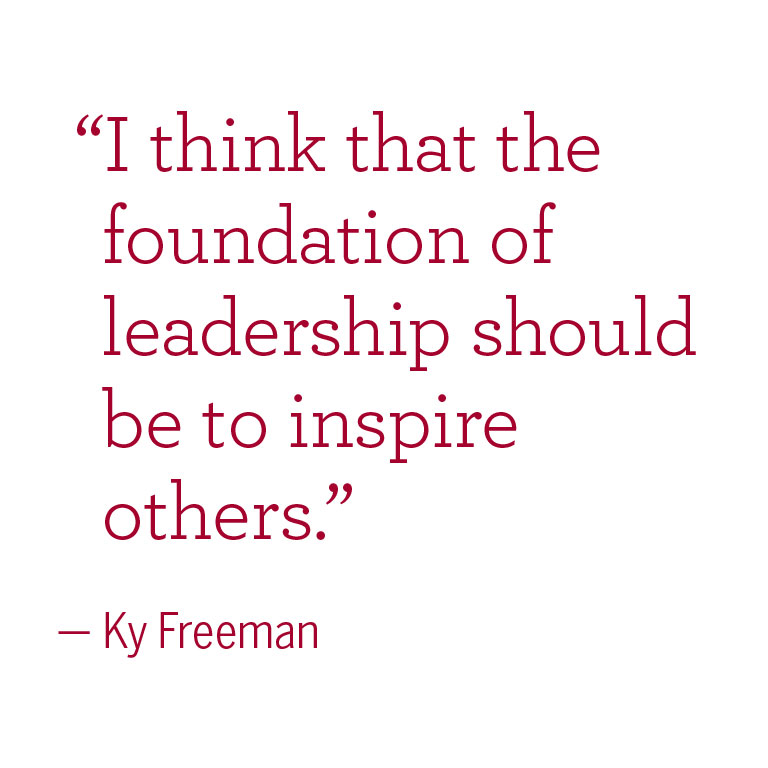 Freeman has a simple but profound take on what makes a good leader: “I think that the foundation of leadership should be to inspire others.”

It’s a philosophy he brought to life in his campaign platform. “I made three promises throughout my campaign: to engage, energize, and empower the student body for collective action. And the way we go about doing that is leading with radical love. Leading with a radical understanding and a radical openness to new ideas,” he said.

Part of what fuels Freeman’s passion for listening to and understanding others is his own journey as an IU student—and particularly his experience with the Groups Scholars Program.

“I’m not the most traditional student, in a sense,” he noted. “I’m considered by the university an independent student … because before I came here, I was in the foster care system.

“[Groups is] the most beautiful thing ever, because that little boy that walked into IU was so traumatized, so scared. And they’re here in Groups to tell you, ‘You are genuinely worthy of all things. And guess what? You’re so worthy that I’m going to make sure that I am with you every step of the way.’”

Ultimately, Freeman hopes to cultivate that same sense of support and belonging among all IU students—an aspiration that is rooted in deep empathy.

“You know, being a gay Black man—and I throw it out there because each of those identities has some marginalization that comes with it; both work against each other in a lot of spaces—I had to face the façade that IU is not home, and it’s not going to be home initially.

“But when you ﬁnd those small pockets on campus that make you feel heard and make you feel seen … that, I think, is truly what makes this very empty house into a home for me. And I was just like, ‘What would that look like—doing that for the entire student body?’”

This article was originally published in the 2021 issue of Imagine magazine.

RAW Tuba: A Story of Survival and Big Dreams

Study, Work, Repeat: Alumni Reminisce About the Jobs They Held While Attending IU

IU has incredible stories to tell. Pride of IU is where we tell them.